We are delighted and proud to announce that or guest speaker for the 2017 event will be Dee Caffari.

In 2006 Dee became the first woman to sail solo, non-stop, around the world against the prevailing winds and currents and was awarded an MBE in recognition of her achievement.

Dee is involved with a number of competitive sailing campaigns and continues to showcase her talents in other arenas such as the media, where Dee is a presenter and producer for the online Global Women’s Sports Network, WiSP Sports and also takes on some commentary roles. Dee is an inspiring motivational speaker and spends time supporting her chosen charities.

We are looking forward to seeing her in Cowes at the Prizegiving dinner. 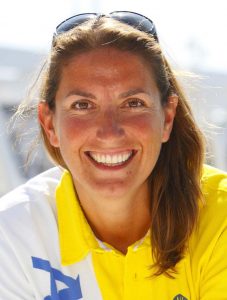